1615 hours: I fell asleep yesterday to the scent of roasting coffee beans emanating from the aft deck. It was 11 am, and I had been awake for just over 24 hours. We had just finished sampling at the famed Station Papa (P26 on Line P, 50˚ 0.000’ N 149˚ 0.000 W). The sampling that Brent, a PhD candidate from the University of Southern Florida, and I were performing required at least two hours of filtering between casts, and by the time we finished filtering one cast, it was on to the next. Needless to say, even the promising odour of freshly roasted coffee couldn’t keep me awake at that point. More on the origins of the ‘Aft Deck Roasters’ (soon coming to a CCGS ship near you!) later.

Line P is a time series of locations in the Pacific Ocean, beginning on the west side of Vancouver Island and extending out to Station Papa. This line is sampled three times each year and provides a valuable way of monitoring changes as years pass, as the data can easily be compared for each set of coordinates, or ‘stations’.

On this cruise, Brent and I have been sampling for trace metals using Go-Flo bottles on a Kevlar line. In the Cullen Lab at the University of Victoria (UVic), we’ll take the seawater samples we collected and analyze them for iron concentrations. Iron is a limiting factor in the ocean, so even in places that seem ideal for growth of primary producers (e.g. phytoplankton), if the minute amount of iron required for growth is not available, these regions will see little to no production. Brent, on the other hand, will return home with 300 L of filtered seawater to look for cadmium, iron and lead isotopes.

Attaching the trace metal clean Go-Flo bottle to the kevlar line on which it will be lowered.

This Go-Flo bottle will be closed at depth to collect a water sample using a weighted “messenger” which slides down the line and releases the closure mechanism. 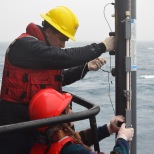 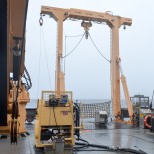 The aft deck of the CCGS John P Tully. The kevlar winch is on the left while the trace metal clean processing container is on the right. Standard water sampling (for oxygen, nutrients, temperature, and salinity measurements) are done with a CTD rosette on the starboard (right) side of the ship.

All of our samples are pretty easily contaminated, given the minuscule concentrations of these elements in the ocean, and the relatively immense amount everywhere else — especially on us! Everyone in the operation has to wear gloves while handling the Go-Flo bottles, the samples, and the Kevlar line. We also do all our filtering in a mobile clean room: it’s a shipping container on the aft deck with HEPA filters mounted to the ceiling to remove contaminants from the air, and in which we have to remove our shoes and wear haute couture clean-room Crocs. We brought those Crocs from the UVic lab, so it’s like a little piece of home I can wear. Brent and I pass the time while filtering by naming the most controversial topics we can think of and trying to debate them — trouble is, we seem to agree on most all of them. All in all, that’s probably a good thing given that it might get a little heated in there otherwise! It gets toasty enough in there already, and that’s just with the sun streaming in.

0540 hours: On our way out to Station Papa, we ran across some fairly menacing seas for this time of year. While standing on a small platform hanging over the Pacific Ocean tying Go-Flo bottles to a line (pictured above) in 4.5 m swells sounds like a hoot and a holler, in order to protect us and the equipment we opted to do the entire station P20 on our way back into Victoria. P20 is what we term a ‘major station’, so the sampling procedure involves multiple net casts (i.e. bongos, ring net, multiple plankton nets or MOCNESS), 3 casts of 5 Go-Flo bottles, and a CTD rosette cast down to ten metres off the sea floor. The deep CTD cast usually ends up going to around 4000 m and takes about 2.5 hours to make it to the bottom and back. It still boggles my mind to think that the massive piece of equipment we all huddle around to collect our samples was just 4 kilometers below us. I think that sort of wonder, coupled with a healthy dose of adrenaline from hitting a good swell while on deck, drive people to fall in love with oceanography.

Brent and I finished up our 3500 m Go-Flo cast for this station at around 0100, and the last sample got capped at 0200. Now, I’m up for my daily watch — this usually entails assisting in bottle prep and performing whatever sampling has to be done at the stations during one’s watch in order to complete the Department of Fisheries and Oceans time-series monitoring. Fisheries and Oceans Canada (DFO) takes regular samples for dissolved oxygen content, dissolved inorganic and organic carbon, nutrients, salinity, pH, alkalinity, chlorophyll, and HPLC (an analysis for phytoplankton pigment concentrations). Depending on which station we hit during my watch, we might also deploy the bongo nets or ring nets. I’m on the 0600 – 1200 rotation.

Now, considering it’s almost breakfast and fresh coffee is about to become immediately relevant in my life: the epic tale of the Aft Deck Roasters. Connor, a PhD student from UBC, brought the thriving business of freshly roasting coffee beans on board. He’d been on the previous Line P trip and garnered the interest of Glenn, another scientist. So, for the last week, Connor and Glenn have been pumping out some incredibly high quality coffee with a popcorn popper-turned-coffee roaster — and have also been systematically kicked out of every location they attempt to roast for sending a not-immediately-identifiable smell of smoke throughout the ship. Thus, the exile to the aft deck. In the last couple days, the business has gained traction and employees… I was recruited to create the logo, and Ashley, the other UBC student, is sales. The menu has been spreading around the ship, but we have yet to actually sell a cup of coffee… our overhead costs have been getting pretty high, but Glenn and Connor are trying really hard to remain true to their craft roaster roots.

Connor (left) and Glenn (right) discussing the finer points of coffee roasting on a pitching deck with a popcorn popper.

Coming soon to a research vessel near you!

The Aft Deck Roasters have to fit in their business goals between filtering, and Connor and Ashley spend about as much time filtering as Brent and I do. They pump their seawater samples through a filter with tiny pores to select for bacteria and viruses, depending on the filter used. They’ll later do cell counts, among other analyses. In ocean ecosystems, bacteriophages, those that infect bacteria, tend to dominate the array of viruses. The Hallam Lab also focuses on bacteria that reside most commonly below the photic zone (below the depth that light can penetrate) in stratified, or layered, waters.

This was the second research cruise for Annaliese Meyer this summer. You can find her blogs from her trip to the Arctic here. In addition to the samples for trace metals, Rick Nelson from Dr. John Smith‘s lab was aboard collecting samples for continued InFORM monitoring.