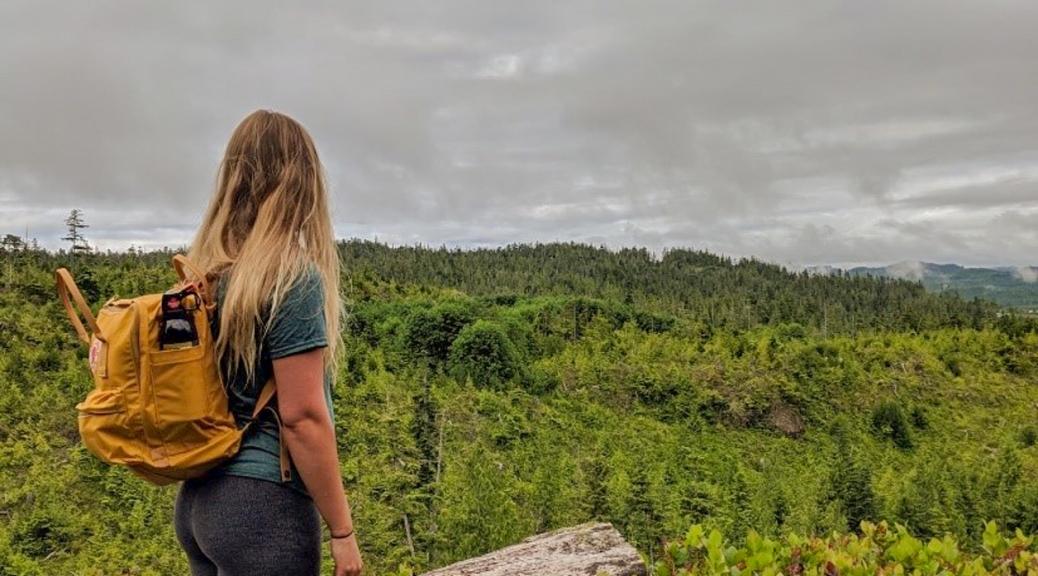 Yesterday I awoke in Port Hardy and was told we would be spending the day docked while the ship refueled. This meant that 13 hours was needed to top up the measly one-million-liter diesel tank beneath us. This also meant that the crew and supernumeraries (aka the scientists) were allowed to disembark and explore Port Hardy. My roommate, Gina, and I went for a hike, recommended by a local, to the site of a WWII plane crash. The hike was through a lush, muddy, and mosquito-ridden rain forest and it felt amazing to stretch our legs and smell some trees. Gina, a Vancouver Island native, told me which berries were safe to eat along the way and I tried salmon berries for the first time! Seemed like a genetically-modified cross between raspberries and oranges to me, but they were very tasty.

After returning from our hike, Shea and I left again to visit the hardware store to replenish some supplies we were both short on. In an attempt to solve my leaky column problem, I bought ten more rolls of electrical tape, and something called “Magic Wrap” which claimed to form a rubber casing around a cylinder and stay water-tight. I have now tried it out with the next seven samples and it seems to be working – THANK GOODNESS.

We then returned to the ship to assemble Shea’s incubator on the helicopter pad. His experiments are looking at the effect of increasing atmospheric carbon dioxide levels on phytoplankton growth. We bubble air with present-day atmospheric constituent concentrations (CO2 ~ 410 ppm) and air with one of the projected constituent concentrations for the year 2100 (CO2 ~ 750 ppm) into separate containers holding the same diversity of phytoplankton and we will soon see how the organisms react to increased levels of the greenhouse gas.

We still had a couple more hours to kill so I went for one last jog on land among the pretty rock faces and lush wildflowers along the highway. As we ate dinner, the ship started to move again which indicated it was time for me to get to work. I processed a few samples over the course of the night, waking every hour to check for leakage and to change out fresh carboys.

I am getting more and more confident with the lab protocols, remembering the crew members’ names, and navigating routes around the ship. I am constantly in awe of the stunning scenery surrounding us. Watching the waves interact, the sky change colours at dawn and dusk, and keeping an eye out for whales doesn’t cease to entertain me. I remain endlessly grateful for the chance to fulfill one of my dreams and take this trip of a lifetime.

Speaking of dream come true, I am about to go take another sample, watch the deployment of an ARGO float, eat a strawberry tarte, and then watch the sunset from the hot tub. Goodnight!

Read more from Chloe’s journey on the across the NE Pacific: Bitter-sweet Bon Voyage