1050 hours: A good night’s sleep and several cups of coffee later, I’ve made it back to the office at UVic. I’ve already succeeding in getting sunburned in the half-day I’ve been home and I’m somewhat pleased with that fact. Despite the midnight sun we sailed with for the last couple weeks, it’s been a while since we’ve had any sort of heat. It’s almost like we were in the Arctic or something. Weird.

Now that I’ve had a few moments to regroup, caffeinate, and remember how to feed myself now that I no longer have Kara and Trevor’s amazing meals three times a day, I’ll do my best to provide a coherent reflection of the past three and a half weeks, in reverse chronological order, as the memories trickle back.

It took three flights, four airports, and twenty-six hours of travel, but we made it home. Imminent weather forced us to helicopter off the CCGS Sir Wilfrid Laurier and make into Barrow, AK a day early, and a cancelled flight kept us in Barrow even longer. I am now able to supply a complete review of almost all the restaurants in Barrow, if you ever happen to end up there. Osaka, the Japanese/Korean/American breakfast place definitely comes number one in my personal Yelp reviews. The increased layover time in our flights led to an important discovery in Seattle: Turkish coffee is essentially nectar of the gods. One of the first missions upon returning home (post-nap) was tracking down where to find it.

Our departure from the ship was bittersweet. No more nights on the bridge between samples, bantering with Bryan, Paul, and Tony, then lapsing into exhausted silence and getting lost staring into the waves. I won’t get to hear Christina’s laugh due to some dry comment from Svein, the chief scientist (well, honestly, I wouldn’t be surprised if the sound could travel from Maryland), nor trades jokes with leading seaman, Nik, about the Box of Death (also known as the box I used for methane and nitrous oxides sampling that contained mercuric chloride). However, most of the crew lives in Victoria, so we already have plans to meet up for board games when they finish their leg. So it was a “goodbye for now”, to both the crew and the ocean. Two and a half weeks more, and I will be returning to the ocean to sample along Line P. 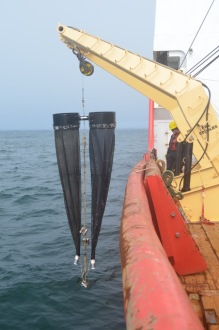 Top of the CTD rosette (which measures Conductivity (an analog for salinity), Temperature, and Depth (with a pressure sensor). It also has 24 “niskin” bottles that can be remotely triggered from the ship to collect water samples. (credit: Kristen Shake)

Van Veen Grab sampler coming back with a sediment sample.

Taking a water sample from the niskin bottle.

The last week before departure passed in a flash, with CTD rosette sampling, Van Veen grabs [a method of sediment sampling] and bongo drops [a plankton sampling net] occurring every couple hours. Between stations, I continued sampling for the InFORM project. With 37 samples processed before Dutch Harbor, I had four remaining to take in the Bering Sea. I had intended on taking more, but the waters proved so productive that filtering the Bering Sea samples took over 24 hours each. Brief respites at the end of each transect (group of sampling stations in a line) gave us time to catch up on sleep.

However, one of those days of respite was a little more exciting – in the morning, we had a rendezvous with the US Coast Guard Cutter Sherman. We took the Zodiacs over to visit this 167-man ship, while they sent a couple of people over to tour the Laurier. Those of the crew I met were extremely welcoming, and happy to take us around to their bridge, engine room and gun deck (we definitely do not have the latter on the Laurier).

That afternoon, we had the Arctic Crossing ceremony. We had crossed the Arctic Circle several days earlier, at 0310. I was up on the bridge at that time, as I had woken up an hour or so before to check on my samples, then came up to say, “Hi.”

Bryan then told me that we’d cross within the hour, so naturally, I had to stay up until we did. There’s no dotted line in the water, in case you hadn’t guessed, but it was still pretty cool (cold, even) to see the GPS turn to 66° 33′ 46.8″ N. As for the details of the ceremony itself, there isn’t much I can say – I’m under an oath of secrecy. All I can tell you is that I survived, and am a tadpole no more! I am officially a shellback and have the certificate to prove it.

This trip has left me inspired, motivated, and filled with an immeasurable respect for all those I worked with. Having now learned a wide variety of sampling techniques, I have such a better idea about what is possible insofar as oceanographic research. Ofttimes, after learning a new technique, or having someone explain their research, or simply staring out at the wash of pyrosomes in the North Pacific, an idea would spark and I would wait impatiently until we next had internet to briefly scour databases for papers on a certain topic. Moreover, not only was everyone brilliant and kind, but they were unwaveringly optimistic at 4 am stations, willing to talk me through their sampling techniques at all hours of the night, and happy to discuss anything from their research to Say Yes to the Dress (there were some long nights in Barrow). Alongside respect is pure affection and gratitude for the friendships with both science contingent and crew that I hope will carry forward. There is a certain sort of bond that doesn’t form unless you’re all sleep-deprived, somehow simultaneously over- and under-caffeinated, and entirely isolated from the rest of the world – I promise you, it’s a beautiful thing.

One final note: before this trip, I had no concept of the scale of this planet of ours. Now, having sailed a distance approximately equal to the radius of the Earth, I find the thought all the more stunning.

Annaliese Meyer was aboard the CCGS Sir Wilfred Laurier as part of InFORM’s annual summer oceanic monitoring program. The ship left Victoria, BC on July 3rd and she arrived in Barrow on July 23rd. Read her other posts: I Need to Explore, Out of Sight of Land, Mostly Regarding Food, The Life Aquatic