Checking in from what seems to be the middle of nowhere! Going out on deck is a surreal experience – nothing but grey swells and sky in all directions. As we were sampling today, we saw a brief glimpse of blue sky for the first time on this trip, and it was an occasion everyone in the science crew came out on deck for to see for themselves.

Saskia collecting a water sample from the rosette.

Sunrise over the NE Pacific 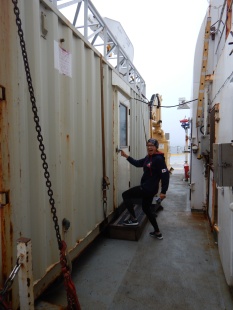 Getting supplies from one of the containers, or vans, on deck.

Over the past few days (it is July 5th, in the afternoon as I write this), I have taken 16 samples between Victoria and our current location. For those who are interested, you can track the Laurier on its journey across the Pacific here. Thirteen of these samples have been processed; some take longer than others due to higher productivity in the water.

I have also had the opportunity to learn to sample from the CTD rosette for some of the other scientists on board. CTD stands for conductivity, temperature, and depth, which the rosette records as it is lowered. On the way up, water is collected at varying depths in Niskin bottles, and samples are taken from the bottles once it is back on board the ship. Different samples require different sampling techniques, and there is a special order in which samples are taken. For instance, samples used for analysis of gasses – such as dissolved oxygen or dissolved inorganic carbon – are taken first, because these are most likely to change the quickest once at the surface. The CTD rosette is dropped down at specific GPS coordinates in the ocean, and these are called “stations”. Doing so allows other scientists to return to the same location and monitor changes in the ocean over time.

In less science-ey news, the sailing has been relatively smooth for this area of the Pacific (or so I am told). It does require adjusting to, but luckily I have yet to be sick. I hope it stays that way! That’s not to say attempting to run on the treadmill on board the ship does not feel like an awful amusement park ride…

Additionally, I have heard rumours of a rite of passage for those crossing the Arctic Circle – those who have crossed are the “shellbacks”, and those who have not are considered “tadpoles”. I am sure some interesting stories will come of that.

(Editors note: Satellite communication was extremely limited during the cruise so this report was filed when Saskia returned to shore after disembarking in Barrow.)