Coastal monitoring:
Results from 22 samples, mostly collected in October and November, did not find any of the Fukushima fingerprint isotope, 134Cs (2 year half-life), in coastal waters. Low levels of 137Cs (~30 year half-life) were present in all of the samples. These new data continue to lie along the increasing trend that we first found last month indicating that the leading edge of the Fukushima plume is in BC’s coastal waters.

For context, below is the same data on a graph with a logarithmic scale on the y-axis (to fit 10,000 and <1 in the same image) using the same colors as in the map above. 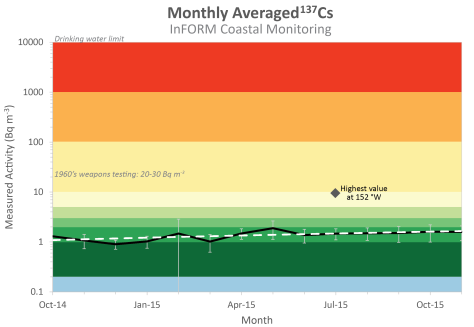 You can see that the levels being detected in our citizen science samples are thousands of times lower than the allowable limit for cesium in drinking water, but are also still well below the levels detected offshore. These offshore waters are still increasing in concentration and serve as a way of forecasting how high the coastal levels will eventually get.

Biotic monitoring:
Results from the 2015 salmon monitoring program were released in February. None of the 156 fish sampled from 16 major BC and Yukon fisheries tested positive for the Fukushima fingerprint isotope, 134Cs. As was found in 2014, 137Cs was found at very low levels from many of the locations when the data from ~10 fish were added together. However, unlike 2014, seven individual fish had detectable levels of 137Cs in them, but these were still at levels <1 Bq kg-1. 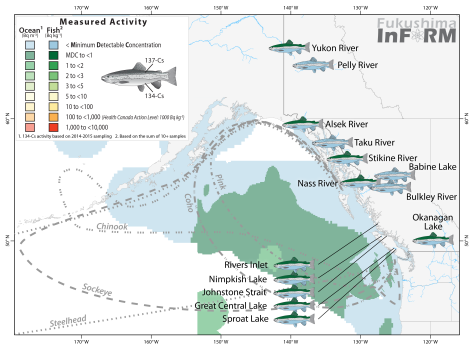 These results show that radioactivity from the Fukushima disaster has not been detected in BC fish as of the summer of 2015. The levels of 137Cs that were detected are well below levels known to be a health risk to the salmon or human consumers.

Read the full report, the press coverage, or learn more about the methods used to attain these results.

Oceanic Monitoring:
The February cruise out to Ocean Station Papa at 50 oN 145 oW was successful last month. The team from Dr. Smith’s lab reports that the weather was better than normal considering it was February in the NE Pacific. We hope to be releasing data from last summer’s monitoring effort shortly as processing is nearing completion. It will be some time before the samples collected on the February cruise are processed and able to tell us if the concentrations of Fukushima contamination are still increasing.

One thought on “March 2016 InFORMal Update”